In the early 1680s, a stonecutter of Lynn supplied a ledgerstone commemorating Captain Thomas Simmell (d.1680), buried at St Ives, Huntingdonshire. In 1684 John Forman told the heraldic visitors that he had employed the stonecutter to make his wife’s uncle’s slab, the interest of the heralds being the arms on the slab Simnell had claimed during his lifetime. The slab was not found when the Royal Commission for Historic Monuments published its Huntingdonshire volume and may have been destroyed in the same hurricane on 8th September 1741 that badly damaged the churches of St Margaret and St Nicholas in Lynn, as the two Lynn churches were reported as having had their spires blown down which the church at St Ives was simply reported as blown down. The stonecutter’s identity is unknown. It could have been William Ahsem a free stone mason of Lynn, whose will was proved in 1682, or Michael Losnetz, a carver active 1682-1716.

William Eldredge was the son of Joseph Eldredge of King’s Lynn, a mason who had been apprenticed to John Fellowes (q.v.) of King’s Lynn in 1725. Similarly, Richard Eldredge was the son of William. It difficult to distinguish their individual chisels, though Jon Bayliss is of the opinion that the Benezet monument at Swaffham and the Hammond monument at South Wootton may both be by Richard Eldredge.

According to Jon Baylis, Richard Eldredge was paid £6 6s for a gravestone for Esther Watson of King’s Lynn in a probate account (Norwich Archive Centre) dated 1806. This may well be for a ledgerstone. As it is not recorded in E M W Hovell, Inscriptions on the Tablets, Slabs and Monuments in the Chapel of St Nicholas, King’s Lynn, King’s Lynn (G R Oswell) 1937, it may have been for either St Margaret’s or All Saints. According to the Universal British Dictionary, a partnership in the mid-1790s was entered into between Martin Short and Richard Eldgredge.

According to E Hillen, History of King’s Lynn, vol.1, Norwich (Hillen) 1907, 387, Start & Eldridge bought for £4 10s in 1787 the slabs from St Margaret’s church, King’s Lynn from which the churchwardens had torn off the brasses. Could this have been William Eldredge, or his father Joseph?

As a ‘free stone-mason’ Fellowes, or Fellows, became a Freeman of King’s Lynn in 1714 as Alderman Burney’s freeman, and between 1714 and 1717 built the library at the west end of the south aisle of St Margaret’s church, which was destroyed in 1874. In 1723 he made the chimney-piece of black and grey marble (now in the smoking-room) for Raynham Hall, Norfolk. With John Parsons of Wells, Norfolk he rebuilt the nave of St Margaret’s church, King’s Lynn in 1742 from the designs of Matthew Brettingham. He married Elizabeth, the widow of John Kirrich of Wolferton (d.1728), and had a son and daughter by her, the latter baptised in December 1731. The will of John Fellows, gentleman, was made 25th October 1756 and proved 6th December the same year. It was witnessed by, among others, John Kirk, his former apprentice. Apart from a bequest of £50 to his daughter Mary Harvey, he left everything to his son William.

Gunnis notes that he took as his apprentice in 1721 his son William who only became a freeman of Lynn in 1758. There is confusion here because John Fellows took his nephew William Fellows as apprentice in 1714/15 and 1721 is the date of William’s freedom. The younger William was apprenticed to his father John Fellows in 1747/8 and was no doubt the same man who was described as a gentleman when he was given his freedom in 1757. The situation is further complicated by the dates assigned to john’s signed monuments. Linnell suggested a date of c.1770 for the pyramidal 1741 Shropham tablet signed by J Fellow, which would indicate a second John Fellows. Hoever, the freeman’s book does not list a second one. Linnell also suggested the same date for the 1735 monument at West Acre signed by John Fellows, which Gunnis mistakenly says is signed by William and which has an added date of 1771. Jon Bayliss thinks that this rather earlier than the Shropham tablet and that a date in the 1740s is not inmpossible for Shropham, which is close to the design on the left of plate 133 of Batty Langley’s 1739 book. The tablet at Wereham commemorates Adamsons dying between 1742 and 1786, with the first Adamsons named in the inscription dying in 1744, which looks a likely date for it being commissioned in the 1740s. While it, too, looks later than the Browne monument at West Acre, it seems that Fellows had his own style, as witnessed by West Acre, the Walsham and Dickinson monuments at Woodston and related unsigned monuments, but could also produce monuments from other people’s designs if asked to do so. The 1738 monument to Richard Dashwood at Cockley Cley is pyramidal and looks later than those at Shropham and Wereham.

John Fellows looks seminal in the development of Lynn as a centre for the monumental trade but the lack of signatures during the rest of the 18th-century hampers the identification of Lynn monument. He took ten apprentices, of whom seven, apart from his son, became freemen but the only signature to appear on Lynn monuments during the second half of the century is Eldridge. Fellows took a Joseph Eldridge as apprentice. According to Gunnis, it was the latter’s son (b.1749; d.1819) who signed a number of monuments, although Jon Bayliss suspects some of these to be by Richard Eldridge, a further generation on.

From apprenticeship records, Kirk appears to be the most significant figure among Fellows’s ten apprentices, taking five of his own, all of whom became freemen. Unlike Fellows, he appears to have signed none of his work. Fortunately three architectural tablets and a black marble ledger are documented, which enables some view to be formed of his ouvre. While the three tablets are treated very starkly compared to his master’s, it would be unwise to come to too definite a conclusion as the best Lynn work of this period is more decorative. Unfortunately, the ledgerstone has only a short inscription, so wider conclusion about his ledgerstone style can be drawn only with difficulty until Andrew Taylor’s is examined.

John Kirk took no apprentices until 1758 despite being free since 1739/40. He was a witness to Fellows’ will. In 1752 he signed the receipts for a monument at Sporle. It cost £45 16d 6d in 1752 and was paid for by Mrs Susanna Edwards. A rather conservative architectural tablet in the church commemorates William Edwards (d.1724). One of his children mentioned in the inscription was called Susannah. A payment of £27 6s 6d to Kirk in 1761 by a Mr Rolfe of Heacham, as executor of Andrew Taylor (d.1760) of Beechamwell, may be a payment for a monument. Farrer records a heraldic ledgerstone to Taylor at Tottenhill but the amount suggests a small tablet too. According to executors’ accounts, in December 1776 Kirk and Baly were paid £52 12s for two monuments to Edmund Rolfe (d.1774) and his first wife, Ann Smith (d.1739), following Edmund’s death and burial at Heacham. They were also paid £8 3s 2d for a black marble ledgerstone in May 1775, the receipt naming Kirk & Baly on the obverse but Kirk & Co on the reverse. The tablets are identical, somewhat plain and, like Sporle, have open pediments. The ledger has a short inscription only. Baly must be John Baly, whose son’s apprenticeship to a grocer in 1788 appears to be the only mention of him in the Lynn apprenticeship and freedom rolls. He married John Kirk’s daughter, Ann. Kirk made his will in 1781 but it was not proved until 1790. John Norman of Hillington, gentleman, Kirk’s esteemed friend, was an executor and undertook the administration. It seems likely that he was related to Kirk’s apprentice Robert Norman, whose location was given as Hillington at the time his partnership with Charles Bottomley of Wells was terminated in 1783.

The receipt for the 1775 Edmund Role ledger at Heacham makes interesting reading[1]:

There are a number of ledgerstones in the King’s Lynn area dating from 1670-1730 by a lettercutter whose lower case ‘w’ is cut as an ‘i’ and a ‘u’: “ . . iuho died . .”. Jon Bayliss has identified this distinctive chisel as that of Michael Losnetz. In the Archive Centre at Norwich is an account from Michael Losnetz, as he signs himself, to Sir Nicholas L’Estrange on behalf of James Calthorpe for £2 3s for engraving the arms and inscription in 1716 on a ledgerstone at East Barsham to Mrs Barbara Strutt (d.1714)[4]. Mrs Strutt’s slab was bought from William Allen, who may have been a Lynn merchant.

Examples can be seen in various churches in the King’s Lynn area and further afield, such as Ely Cathedral. At Great Massingham, the 1866 restoration by Daniel Penning saw the replacement of the nave floor, when the civilian ledgerstones were all moved to the west end of the nave and those to former incumbents went into the churchyard, at the east end of the chancel. It is among the latter that an example of 1699 off this chisel can be found.

Losnetz was employed as a carver on the Market cross at Lynn, erected 1708-1710, and on the St James Workhouse between 1682-1683, though he was not paid until 1691 for the figures of a boy and girl flanking the pediment over the doorway.

1699 Great Massingham, St Mary the Virgin Yet to ascertain 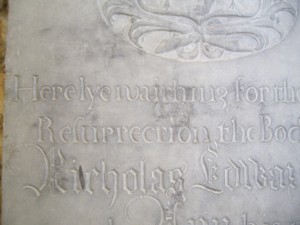 [3] ‘Raising another’ probably meant lifting and taking away the temporary freestone slab.

[4] Although called ‘Mrs’, Barbara Strutt was a spinster. According to the inscription her ledgerstone, she

daughter of Christopher Calthorpe of Cockthorpe (Norfolk) – and died in 1714 aged 81 years.

[6] In Ely Cathedral, west end south choir aisle. Mingay was Receiver of the Hon Co of the Great Levels.

[7] Later inscription by Losnetz to her husband, Richard

[8] Now in churchyard, having been removed from church during 19th-century restoration work.

[12] This appears as an additional inscription on the ledger for Michael Revet, d.1667.

[13] In Ely Cathedral, north choir aisle by Lady Chapel corridor. Browne was a draper in Ely.

[14] Mural monument, on the exterior of the building. Now no longer there.

[15] This appears as an additional inscription on the ledger for Thomas Say, d.1682.

[18] Formerly on an altar-tomb but now laid flat.

[19] Mural monument on the outside wall of the chancel. Now no longer there.

Could it be that the later two inscriptions are from an imitator the Master of the Archaic W?